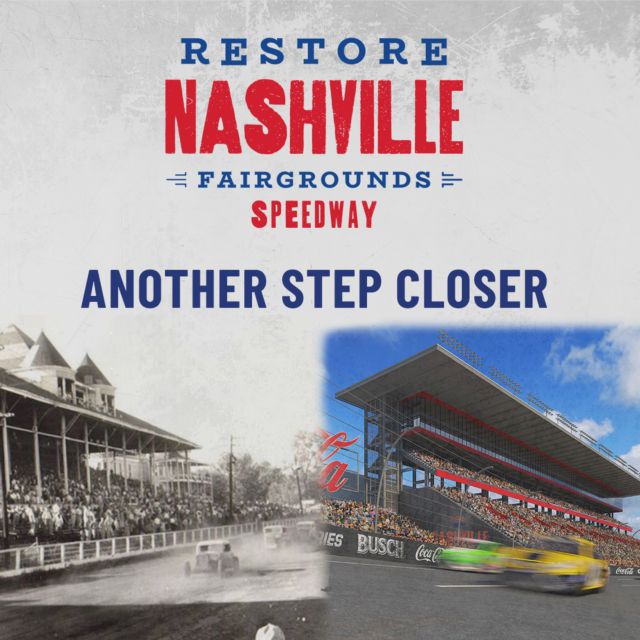 The Nashville Metropolitan Mayor’s office, in partnership with Bristol Motor Speedway (BMS), has reached an agreement on contract terms to renovate and lease the historic Nashville Fairgrounds Speedway (NFS) venue that includes the transformation of the Speedway campus into a year-round, multipurpose venue that will host NASCAR and non-racing, revenue-generating events.

Subject to approval by the Board of Fair Commissioners, Metropolitan Council and Sports Authority, BMS will begin its long-term lease to manage and operate NFS, and assume all financial responsibility for track renovations and ongoing maintenance.

“Partnering with Bristol allows Nashville to preserve our 131-year tradition of racing at the Fairgrounds and bring the legendary speedway back to life as a valuable and exciting part of the modernized Fairgrounds,” said Nashville Mayor, John Cooper. “Recognizing our obligation to maintain the track, we are leveraging investments from the state, the tourism industry, and facility users to make this a financial success for the city. We can put this landmark back on the national stage. I look forward to working with the Fair Board, Sports Authority and the Metro Council in the months ahead.”

Tonight the Nashville Mayor’s office delivered the multi-tiered contract to the Fair Board and presented the merits of the agreement to the gathered officials. As the commissioners begin their due diligence and review the contract, it is expected that the Fair Board will provide two open-forum discussions for the public to provide their feedback and continue on-going negotiations before a formal vote takes place in January 2023.

Once approved by the Nashville Board of Fair commissioners, the contract will then be presented to Metro-Council for review and approval, and then to the Sports Authority for the final sign-off, before the contract returns to the Nashville Metropolitan Mayor’s office for the binding signature.

“This is a tremendous step forward for Mayor Cooper’s office, the city of Nashville and our company to preserve history with a revitalized Fairgrounds Speedway,” said Speedway Motorsports President and CEO Marcus Smith. “It’s time to establish a bright future for NASCAR’s return to the fairgrounds and create impactful new entertainment that will benefit the city and region.  We’d like to thank the NASCAR community, local racers, business and non-profit partners who’ve helped us reach this point, and we look forward to working with Fair Board and Metro Council in the coming weeks to make this vision a reality for Nashville.”

Said Jerry Caldwell, president and general manager of Bristol Motor Speedway: “It’s been a long multi-year process through selections and negotiations and we are eager to see this project through its completion. There is a lot of work ahead of us as we meet with city officials and work with the community to complete a truly comprehensive restoration of the Nashville Fairgrounds Speedway for the enjoyment of future generations. We encourage race fans to continue to show their support for this special piece of motorsports history. We are thankful to all who have supported this venture throughout this process.”

Completing a comprehensive renovation of the Nashville Fairgrounds:

Planned renovations include installation of state-of-the-art sound mitigation components that will reduce racing noise by an estimated 50 percent over current conditions, modernizing driver and spectator safety features, grandstand replacement, and the addition of a new multi-purpose event facility.

Recent renovations to the Fairgrounds include a new MLS stadium, Fair Park and event expo facilities. The revitalized Fairgrounds Speedway will produce a significant economic impact for Nashville and the region. An analysis by Tourism Economics estimates the speedway would generate about $200 million annually in economic activity through visitor spending in hotels, restaurants and other local attractions.

Currently, the All-American 400 featuring local racing with 10-classes of cars has been a staple event since 1981 with current NASCAR stars such as Chase Elliott, Daniel Hemric and John Hunter Nemechek capturing coveted titles.

BMS is part of the Speedway Motorsports family, which owns and operates 11 major sports and entertainment destinations around the country.

About Bristol Motor Speedway
Forged amid the scenic mountains of Northeast Tennessee near the Virginia state line, Bristol Motor Speedway is The Last Great Colosseum, a versatile multi-use venue that hosts major auto races, football games, concerts and many other captivating events. The facility features a 0.533-mile concrete oval race track with 28-degree corner banking and 650-feet straightaways that offers racing in several NASCAR touring series, highlighted by two major Cup Series weekends each year. In 2020, the track also served as host of the prestigious NASCAR All-Star Race, and in 2021 began converting to a temporary dirt track each spring to take the Cup Series back to its racing roots. While at the track, fans are offered a unique viewing experience courtesy of Colossus TV, the world’s largest outdoor center-hung four-sided video screen with a 540,000-watt audio system. The adjacent quarter-mile dragstrip, Bristol Dragway, offers more than 50 events annually, including the marquee NHRA Thunder Valley Nationals. The Thunder Valley Amphitheatre presented by Ballad Health transforms Bristol Dragway into a premier outdoor concert venue for the world’s greatest music performers. Three football games have kicked-off inside the oval, most notably the 2016 Pilot Flying J Battle at Bristol, where border rivals the University of Tennessee and Virginia Tech met before an NCAA-record crowd of 156,990. In existence since 1961, Bristol Motor Speedway was purchased in 1996 by Speedway Motorsports, Inc., a publicly traded company that is a leading marketer and promoter of motorsports entertainment in the United States. For more information, please visit www.bristolmotorspeedway.com.